The Australian Open has had its share of ups and downs but continues to be a grand slam worth looking forward to. It is a meeting place for some of the best tennis talents in the world. It is also the first grand slam and occurs in the final two weeks of February. There are some matches that never entirely leave the audience’s minds due to the intensity and level of excitement. 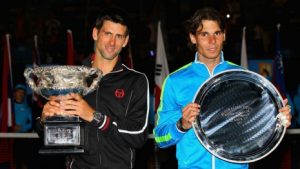 Watching Novak Djokovic and Rafael Nadal battle it out was one of the greatest highlights of the Australian Open to date. Novak emerged winner, but the amount of energy and determination of both players made them both winners in their own rights. People were quick to point out that they both seemed to be running on reserves of willpower they probably never knew they had. The match went on for an unbelievable 5 hours and 53 minutes. It started on Sunday evening and when till 1:37 a.m. on Monday. It was not the first time the two players had met. They had previously battled for the title twice. You could see the level of exhaustion at the award ceremony when neither of them could stand up straight.

Two sisters playing against each other is already enough to make any grand slam one of the greatest matches. Although Serena had dominated against Venus in the previous Grand Slams. She took home the French Open, Wimbledon and US Open championships in 2002. Serena did not let down her guard in 2003. She went down in history as the fifth woman to simultaneously hold all four major titles. What made the match so exciting to watch was the amount of power displayed by both players. At no point would you say that either of them got control of the game.