Attending the biggest tennis event of the year is not just about watching the games. Even though it’s the main attraction; it is also about all the other fun activities that the organisers have planned like exploring the city of Melbourne. The Australian Open is undoubtedly the most prominent tourist attraction event in Melbourne. Over 700,000 tourists attend from all over the world. There is no shortage of activities for tourists to engage in during the two weeks of the open. Here is a list of activities people get involved in. 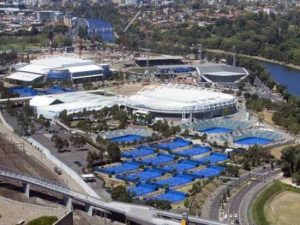 Matches happen at Melbourne Park, which is a few minutes from the city centre. Here tourists can enjoy watching all the best tennis players in the world battle it out right in front of them.

Melbourne Park hosts a music festival featuring some of Australia biggest names and other international artists. Spectators can still watch the matches on the screens during the party.

Fun for the Kids

The Australian Open Ballpark is a particular area set up just for the kids so that families don’t miss out on the fun. Here kids can ride the 60-metre zip line, watch shows on the stage and dance to live music.

Walk Around the City

The city is plush with laneways that have coffee shops, boutiques and numerous street artists. Melbourne is famous for its markets where you can shop from vendors of all cultures. Tourists can also get a ground pass that allows them to visit all the different outdoor courts, the arena, the fun zones, pop up stalls and other attractions.

Australia kicks off the year in the world of tennis with an event that everyone can enjoy. Tourists also get to bask in the magnificence of the Australian summer and be a part of history-making moments.