The Australian Open’s 108th edition was held from 20 January to 2 February 2020 at Melbourne Park, and it was even better than before. The Grand Slam tennis tournament comprised events that saw professional tennis players compete in singles, doubles, as well as mixed doubles. Guess who emerged as the Women’s Singles champion? Sofia Kenin, who was born in 1998 and also went by the nickname “Sonya”. Here are several more things you need to know about her.

Sofia Kenin Was Born in Moscow 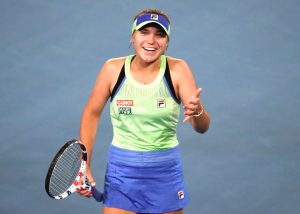 Kenin’s birthplace is Moscow, Russia, a fact that many people do not know about her since she is now American. Her family relocated to the USA several months after her birth. Her mother, Lena Kenin, once served as a proficient nurse in the Soviet Union.

Kenin had loved tennis for a long time, having begun playing the sport when she was only five years old. Her father, Alexander Kenin, enjoyed the game as a pastime. He was her inspiration, as well as her primary coach when she was younger.

Yes, Kenin has had Rick Macci’s attention throughout her entire tennis career. He revealed that he always knew the American prodigy was going to become one of the world’s best tennis players from their first training session when she was only five. The veteran coach has worked with some of the biggest names in the tennis industry, including Serena and Venus Williams.

Winning the 2020 Australian Open Women’s Singles title made Kenin one of the youngest American tennis players to win in that category, the other one being Serena Williams in 2002. Since Williams in 1999, Kenin was also the first American to win the WTA Most Improved Player of the Year award in 2019.